Possibly the best way to describe a Braumeister is as a hybrid version of brew in a bag, because mashing and boiling is done in the same vessel.

The one major difference from BIAB is that in a Braumeister the mash liquor is pumped through the malted grain for the duration of the mash. In this respect, it has aspects of HERMS (heat exchange mash system) or RIMS (recirculating infusion mash system). Like in BIAB, many Braumeister brewers do not sparge the grain at the end of the mash.

An advantage of a Braumeister is that it is largely automated. The mash strike temperature (water temperature when the grain is added), mash times and temperatures in up to five steps (increases) and boiling time are all programed before the start of brewing. The Braumeister then heats the water so the crushed grain can be added, keeps the mash temperature correct and turns itself off at the end of the boil. It even beeps at the times you set to add hops. It's oversimplifying it a bit, but all you need to do is program the Braumeister, fill it with water, add the grain to be mashed, remove the grain after the mash, add any other ingredients at nominated times (when the Braumeister beeps) and transfer the wort at the end of the boil.

The version of the Braumeister that produces 20 to 23 litres of finished beer is fairly compact and about the size of a 40-litre catering urn many people use for BIAB.

On the down side, Braumeisters are expensive (about $A2500 for the version that makes 20 litres and $A3500 for the 50-litre version, which requires a 15-amp circuit). Also available are 200-litre and 500-litre versions that need three-phase power, but clearly these are not designed for homebrewers!

Step by step: Brewing with a Braumeister

This guide is a work in progress and currently is more a description of how the Braumeister works than a guide to using one.

This is the Braumeister, with cheap cardboard insulation to help the temperature rise quicker, conserve energy and maintain a good boil. (Cooper the staghound is in the background. He is named after the great Australian beer.) 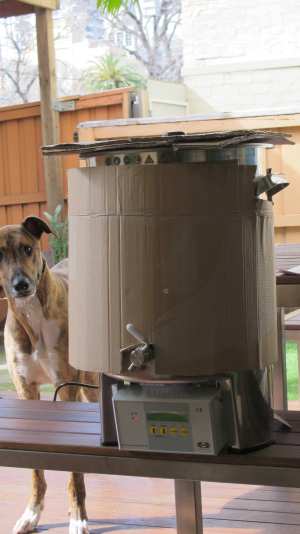 This is just after the grain has been mashed in (mixed with the mash liquor). The mash liquor is being pumped from the outside ring, up through the grain and cascading over the outside, to be recirculated. At this stage the liquid is quite cloudy.

This is almost at the end of a 45-minute mash and the liquid is running much clearer. 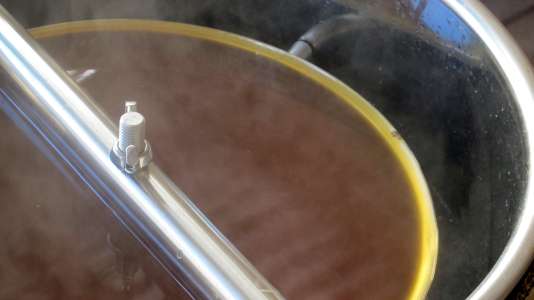 At the end of the mash the "malt pipe", as the Germans call it, is lifted out and the grain in it is left to drain for a few minutes. Some Braumeister owners sparge (rinse) the grain to extract extra sugars, but the instructions don't mention sparging and it seems most people don't bother. 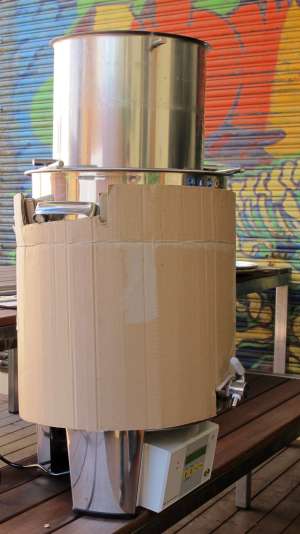 This is the stainless steel filter sitting on top of the grain while the "malt pipe" is suspended out of the liquor, which is coming to the boil. Underneath the filter is mesh, which filters out the smaller particles. 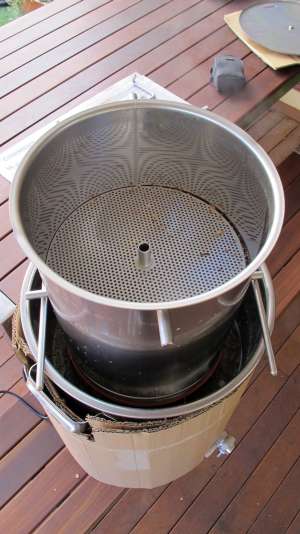 The wort at the boil. The "malt pipe" is in the background waiting to be emptied of the spent grain. 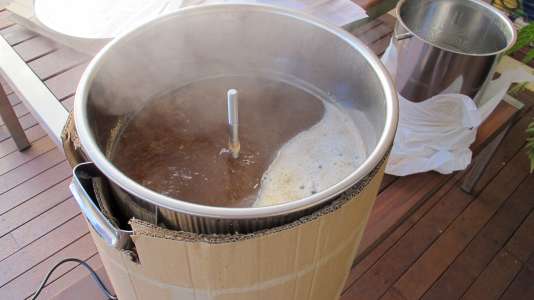 The crud in the bottom of the boiler after the wort is drained off. 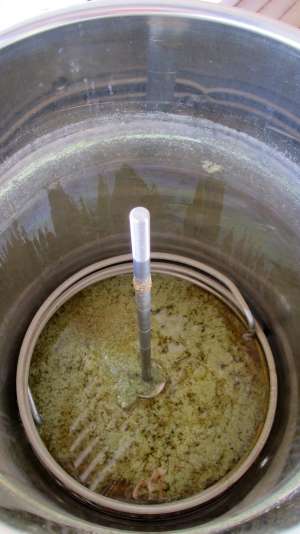 The wort in the cube. The cube has a stated capacity of 20 litres but holds closer to 23 when completely full. In addition, the heat from the near-boiling wort softens the plastic and allows the walls of the cube to bow out, increasing its capacity slightly. There's probably about 21 litres in the cube below, which has had the sides squeezed in before being sealed, to make sure as little oxygen as possible remained. 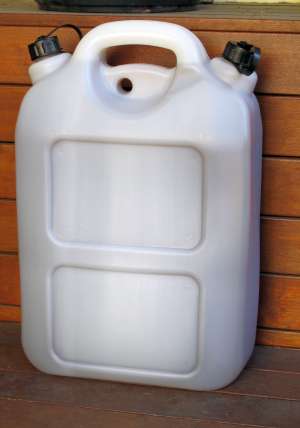