Thanks to homebrewandbeer.com member and award-winning brewer DrSmurto for this tutorial and pictures.

While there are many ways to brew all-grain beer, below is the method I use.

I hope this guide helps demystify the process of all-grain brewing, because it really is quite simple. You can make it as complicated as you like, but the basic process is easy.

My three-vessel setup is a converted Esky for a mash tun fitted with a perforated false bottom, an electric hot liquor tun (HLT) fitted with a thermometer and a 50-litre keg for a kettle, fired with gas. It’s a very basic setup that hasn’t cost much and has had very few modifications since the first brewday in 2007. Gravity and manual handling are my friends; I do not use pumps to transfer any of the liquid.

This tutorial is a simple, single infusion, which means the mash is done at one temperature rather than being increased in steps during the mash, or a decoction mash.

Preparations begin the night before brew day, when I prepare the grain that I’ll mash the following morning.

The first step is to weigh the grain, unless you have bought your grain in exact quantities required. I have electric scales but any kitchen scales will do. 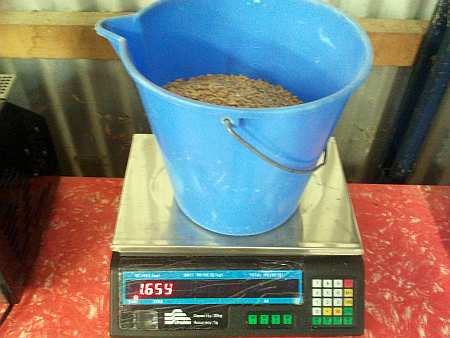 The grain then needs to be crushed. I have my own mill to crush the grain, but many homebrew stores can supply ready-crushed grain. Obviously you can skip this step if you don’t own a grain mill and you will buy your grain crushed. 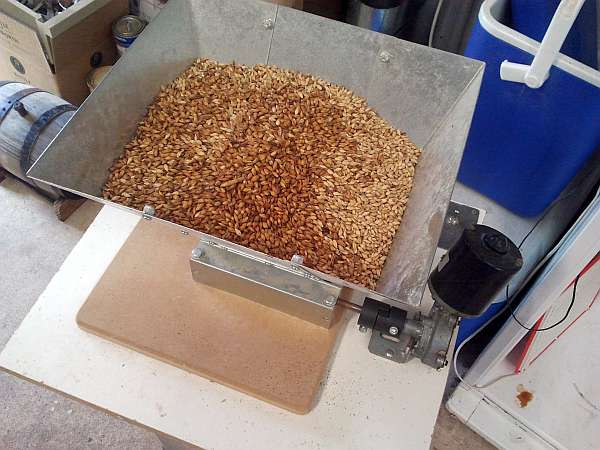 This picture shows the false bottom (supplied by Beerbelly) in the empty mash tun (the Esky) that will filter out the “spent” grain when the mash is finished and I run off the sweet liquid that is created. 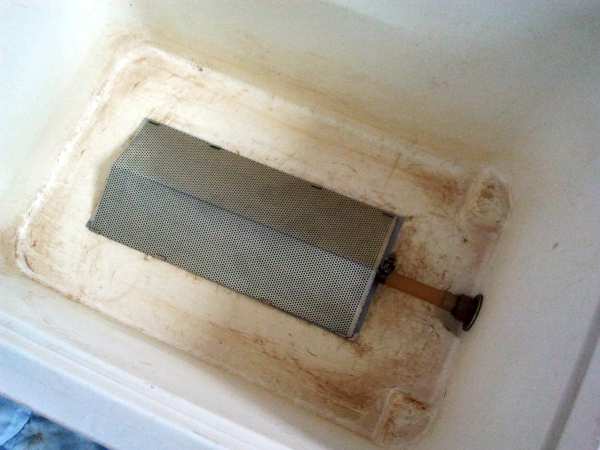 Here is the crushed grain ready to be mashed the next morning. The white powder is some salts I need to add to almost all my beers because I brew with rainwater, which contains nothing as far as the ions that are required by the brewing process. If you are starting out in all-grain brewing I’d suggest using straight tap water. Find out more about water for brewing here. 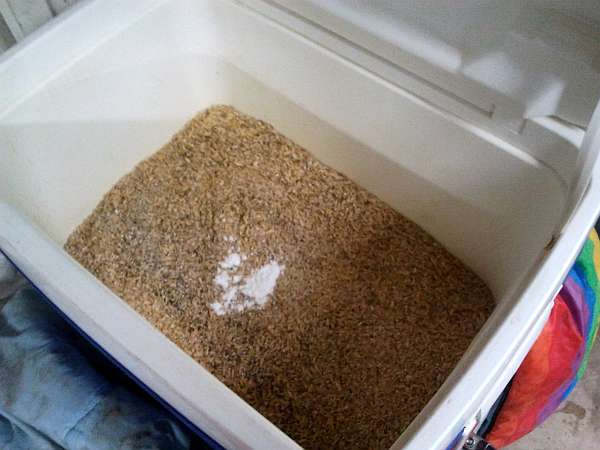 The other thing I do the night before is fill the HLT and set a timer to heat the water to “strike temperature” (the temperature at which the water needs to be to achieve the correct mash temperature). This means that beginning brew day is simply a matter of opening taps and stirring the mash once the water is in the mash tun.

The first thing to do on brew day is to “dough in”, aka mashing in, aka adding hot water to grain.  I fill the mash tun from below the grain, via the false bottom, in a process called underletting, rather than adding water to the top of the grain. I find that underletting mixes the water and grain better and results in fewer dough balls (dry clumps of grain).

This picture shows the HLT connected to the tap on the mash tun, allowing gravity to force water into the Esky. 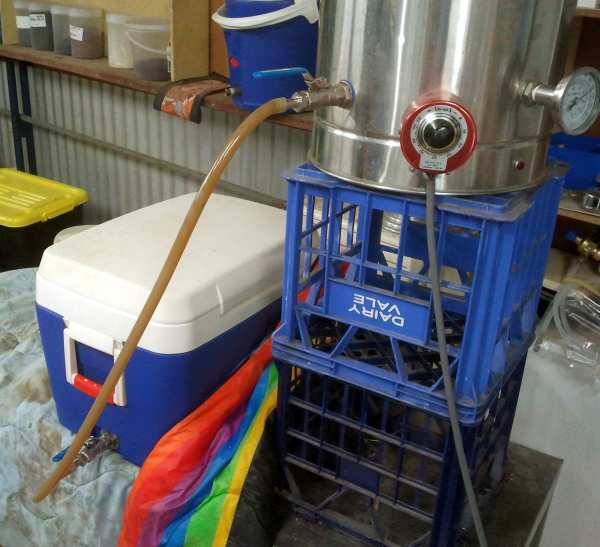 Once the water has been added I stir thoroughly using a mash paddle (can be a purpose built mash paddle, or just a large spoon) until the water and grain are well mixed and the temperature has stabilised. 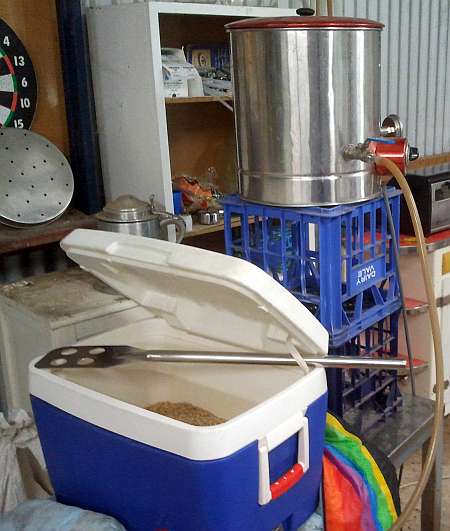 I measure the temperature and can adjust up or down with hot or cold water as required but once you has brewed a few times and get to know your system this adjustment is normally unnecessary as you hit your mash temperature spot on.

Steeping grain, a process familiar to many kit brewers, is the same physical process, but with mashing you are converting malt starches to sugars as opposed to steeping crystal malts, which is simply washing the sugars from the grain using warm water. I measure the temperature with an accurate thermometer. In this instance I am brewing an oat porter and am doughing in at 70C (mash temperature). 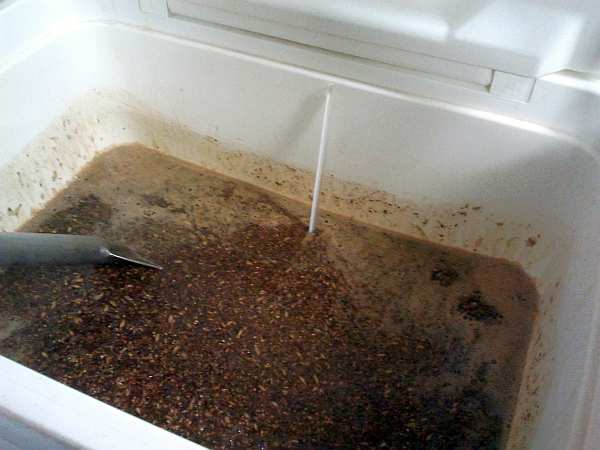 The mash/dough-in water needs to be hotter than the required mash temperature due to the lower temperature of the grain, mash tun and hose used to transfer. You can pre-heat your tun with hot water prior to adding the grain but when you use brewing software (Beersmith, Promash, etc) you can adjust the required water temperature by entering the actual air temperature. In this case my water is at 80C to hit a mash-in temperature of 70C. The big gap is due to the chilly morning winter I was brewing in. 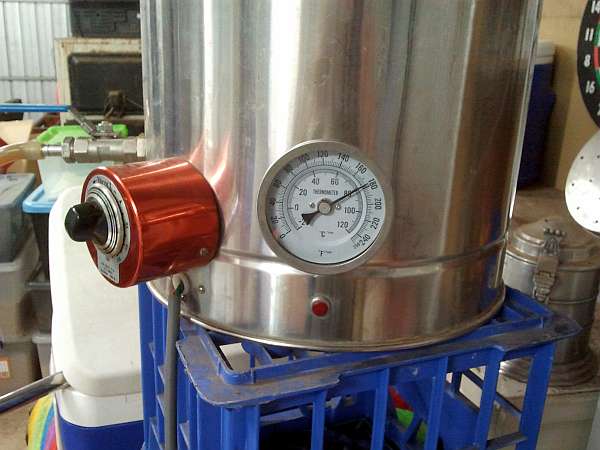 At this point I close the lid, wrap the mash tun in an old sleeping bag for further insulation (air temperature on this brewday was 6C), refill the HLT and set it to heat the water that will be used later to sparge (rinse) the grain, then go inside for breakfast. 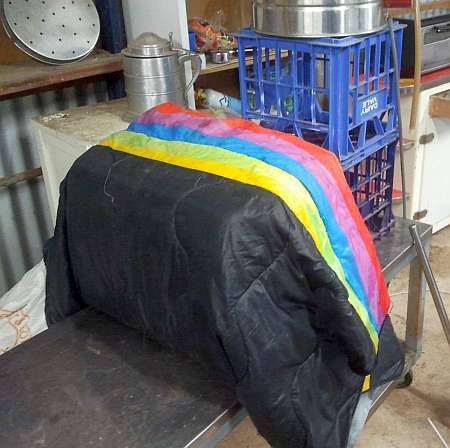 The mashing time is nominally 60 minutes, although can be anywhere from 45 minutes to several hours. At the end of the mash the temperature is usually raised for a mash-out, although this step is not essential.

The reason most brewers do a mash-out is to denature (kill) the enzymes at this point rather than when you start heating the wort, and to make the liquid easier to flow out of the grain and the mash tun. At higher temperatures, liquids decrease in viscosity (or thickness — honey is viscous, water is not).

You can bring the mash temperature up to mash-out temperature (76C to 78C) using a number of methods. Adding boiling water is the easiest unless you are able to heat your mash tun directly. I do decoction mashouts but I’ll leave that for another day.

First, though, we need to clarify/clear the wort by recirculating (aka vorlauf). This is simply running the liquid out of the mash tun and returning it until the liquid is clear. I use an aluminium foil tray with many holes punched in it to sit on top of the mash. 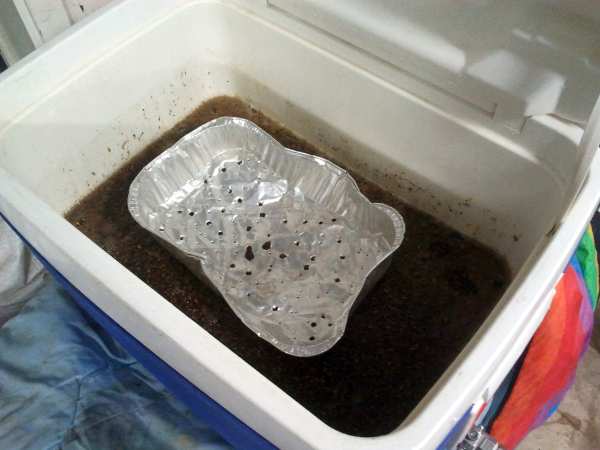 When I pour these first runnings into the foil tray it dissipates the liquid, which is important when you are trying to settle the grain out and get a clear liquid. 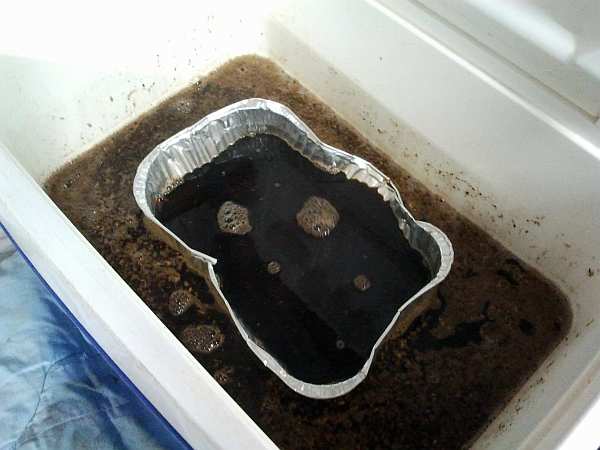 Once you are happy that the liquid is running clear you run it out to your kettle, which I do via a hose into a bucket. 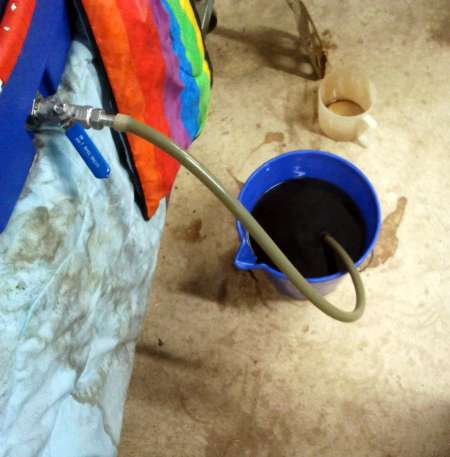 I batch sparge, which means I run out all the liquid from the mash tun, turn off the tap, add more hot water, stir, recirculate (vorlauf) again then drain.

Another sparging method is fly sparging. After you have recirculated the liquid and it is running clear and you are ready to start collecting the liquid, you add hot water to the top of the tun at the same rate as you collect it, making sure you always have several centimetres of liquid above the grain bed. Batch sparging is easier, while fly sparging is more efficient.

This is the inside of my kettle, in which I boil the beer. The device at the bottom is a hop screen, which helps filter out bits of hops when the kettle is drained. These bits of hops can block my wort chiller. 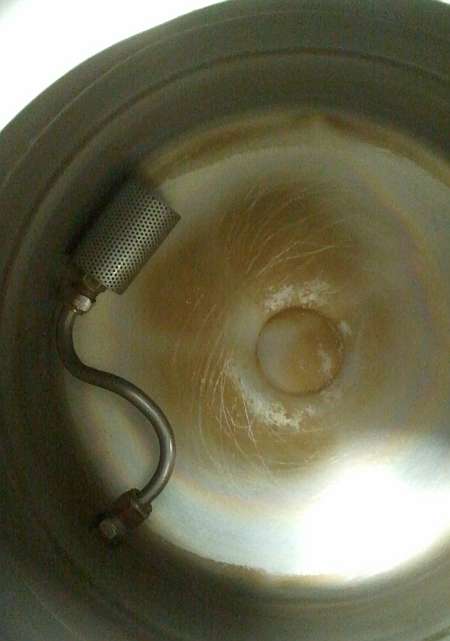 Once you have sparged you have a kettle containing your sugary liquid, you need to boil it and add hops. My kettle sits on a NASA/turkey burner, which is raised on bricks to give me the height I need to gravity feed the wort through a chiller at the end of the boil. 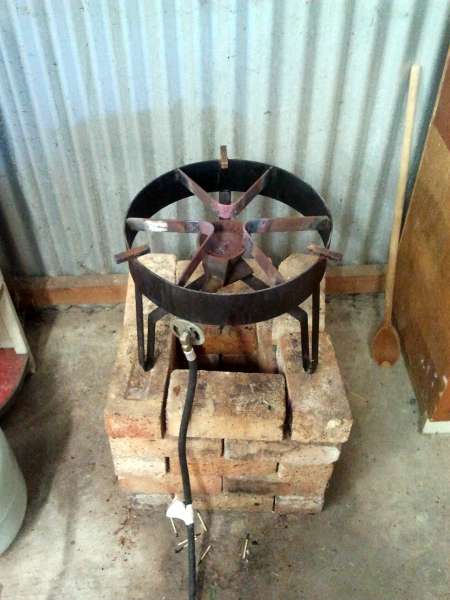 This is the burner, with the kettle in place ready for the boil to start. 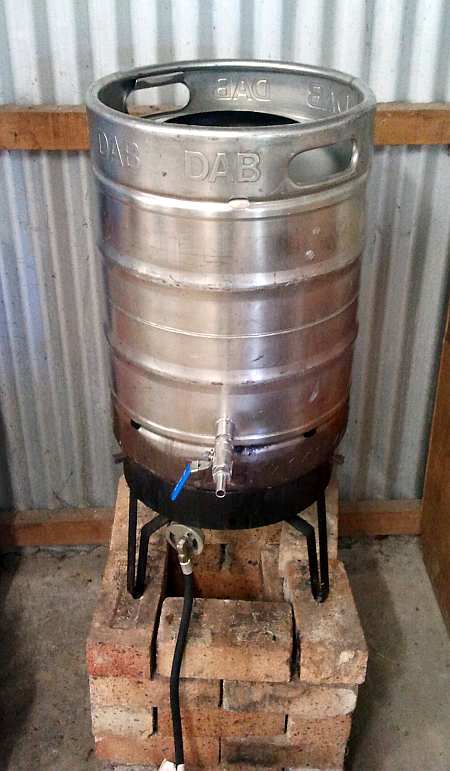 As you bring the wort to the boil it will start foaming. Once it's boiling start timing. This is the start of the hot break which is due to proteins in the wort coming together and then precipitating/dropping out of solution. 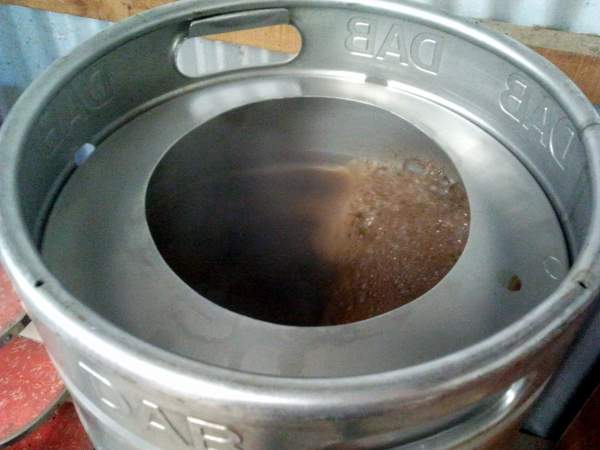 You boil the wort for between 60 minutes to a few hours. In general, most people boil for 60 minutes. I boil for 90 minutes but add the first hops after 30 minutes of boiling. This is a personal choice. I find the longer boil helps with the clarity of the finished beer.

Once the boil is finished you need to stir the wort (whirlpool) to make collecting the clear wort easier. Stir rapidly for 1 to 2 minutes to create a good whirlpool. I generally wait about 5 minutes after flameout before doing this to allow the wort to cool down enough to stop the convection currents.

Once you have whirlpooled you have two options — chill or no-chill. This is not a debate so the choice is yours. No-chill is simply running the hot wort into a sanitised cube, squeezing as much air out as you can without burning yourself and sealing the cube. The wort will slowly cool down to air temperature, at which point you can tip it into a fermenter and pitch your yeast. See the brew in a bag section for pictures of no-chill and the fermentation section for more information on chill versus no-chill.

I chill my wort, so after the whirlpool I set up my plate chiller, run sanitiser through it via hoses and into the fermenter, as shown in this picture. 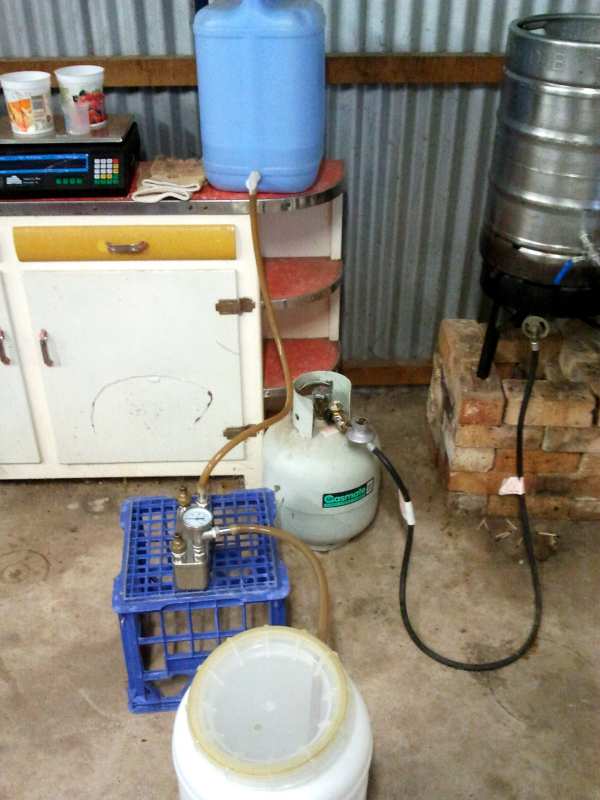 This is a close-up of the hoses connected to the plate chiller, through which sanitiser is running. 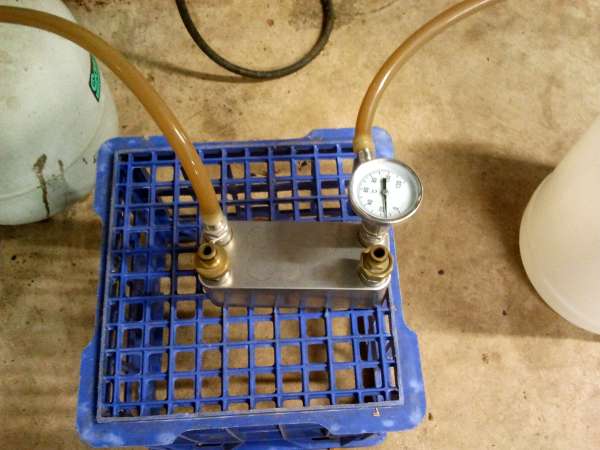 Fifteen to 20 minutes after flamout I start running the hot wort through the chiller.

The cooling water comes from my rainwater tanks (running through the garden hose in the picture below), which on this brewday was 12C so easily cooled down the wort to ale-pitching temperature of 18C-22C in a single pass. (Ignore the temperature on the thermometer; it is broken and needs replacing.) 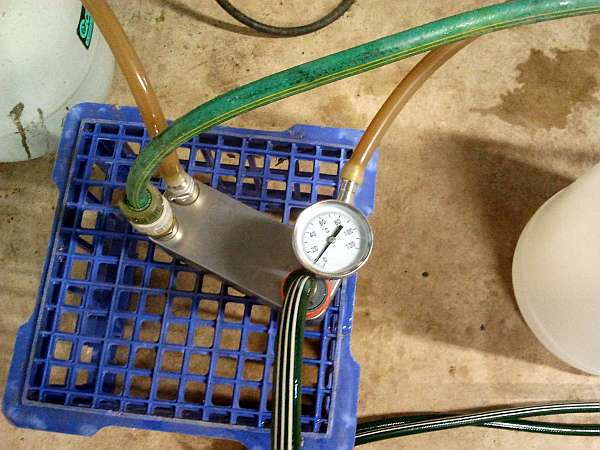 Once the wort has been chilled and is in the fermenter you need to pitch the yeast and aerate the wort. Dropping the liquid from a height, shaking the fermenters and whisking using a kitchen whisk are all options. A better alternative is to get an aquarium pump and pump air through a sterile filter using an airstone. Even better is using pure oxygen and an airstone. The more oxygen you get into your wort the happier your yeast will be. See the fermentation section for more information on aeration.

(Whether dried yeast requires the wort to be aerated is a vexed question. Yeast suppliers say that for the first use the answer is either no, or not unless the beer will be above 5% alcohol. Whether you decided to oxygenate if you're using a dried yeast is up to you.)

This is a yeast starter ready to be pitched into the wort. 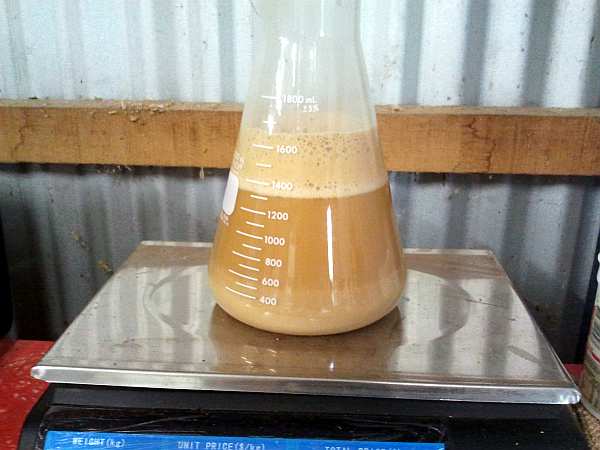 And here’s the result of the brew day: the wort in the temperature-controlled fermenting fridge. 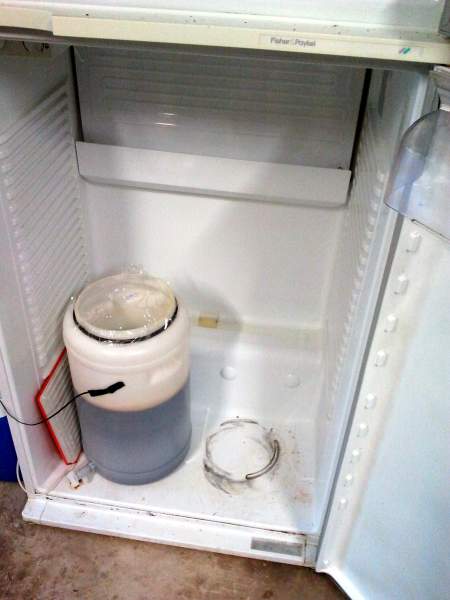 There are many methods of brewing. My only experience is with the setup above.